Vemco recently hosted a commemoration of their first shipment of products to Cuba. Present at the ceremony were Senator the Honourable Paula Gopee-Scoon, Minister of Trade and Industry, Her Excellency Tania Diego Olite, Ambassador of the Republic of Cuba. Ms. Ana E. Martinez Economic & Commercial Counsellor of the Embassy of Cuba, Mr. Ashmeer Mohammed Chairman of ExporTT and Mr. Anthony Agostini, Managing Director, Agostini Limited.

Senator the Honourable Paula Gopee-Scoon, Minister of Trade and Industry, congratulated Vemco on its first exports to Cuba. She said “this new relationship with Cuba is a significant achievement and a major milestone in the diversification of Vemco’s export markets and will contribute to an increase in Trinidad and Tobago’s non-energy exports.” Minister Gopee-Scoon commended Vemco for its commitment and perseverance in pursuing the Cuban market, which is very important to T&T, while satisfying all the international requirements. She added that Trinidad and Tobago is Cuba’s largest trading partner in the Caribbean and anticipates that this achievement will further strengthen both countries’ bilateral economic and trading relationship, resulting in tangible benefits. Highlighting that Vemco continues to be one of the leading non-energy manufacturers in T&T, the Trade Minister said, “Vemco is a sterling example for other local manufactures to follow”.

Her Excellency Tania Diego Olite, Ambassador of the Republic of Cuba noted that 8th of December marked the forty-eight Anniversary of the establishment of diplomatic relations between Barbados, Guyana, Jamaica, and Trinidad and Tobago, the four CARICOM countries independent at that time, and Cuba. That historic and courageous act of 8 December 1972 has grown over the years into a strong fraternal relationship between all the Member States of the Caribbean Community and Cuba. She intimated that “the friendly and close relationship that unites CARICOM and Cuba is a shining example of South-South Cooperation. This is continuously refreshed by regular bilateral interactions as well as by our collaboration in hemispheric and international fora.”

Christopher Alcazar, Vemco’s CEO, has always been an advocate of growing export market share beyond CARICOM, including Latin America and key international markets. That’s why he sees his Company’s first exports to Cuba in December 2020, as a move towards the fulfilment of its goal, “of expanding outside the footprint of the CARICOM”. Alcazar thanked Minister Gopee-Scoon “for being an indefatigable advocate for manufacturers for the past six years and that his company was looking forward to a very fruitful year in 2021 and beyond.” He said that “Vemco will benefit from export opportunities, that will also result in import substitution which preserves foreign exchange for our country.” He thanked Ambassador Tania Diego Olite for the great hospitality that his company’s representatives received “when we landed in Cuba”. He continued: “The welcome was so warm, it gave us the spirit to overcome challenges and here we are today commemorating our first shipment to your beautiful country”. He intimated that “the T&T manufacturing sector is well positioned to generate much needed foreign exchange, at a time when our energy sector is in steep decline. We are therefore also grateful to ExportTT for their role in helping us to connect with distributors in Cuba and across the globe.”

With over 60 years of heritage in producing quality foods for the local and regional markets, Vemco is a leading manufacturer and distributor of local and global fast moving consumer goods’ brands. Vemco was founded in 1958 with a mission to deliver life-enriching experiences to the world and has been trusted through the generations. 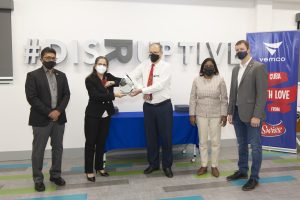 For more information regarding our export distribution contact us here.